Multiple people have been left dead or wounded in the western region of Ghana, after a truck carrying mining explosives crashed into a motorcycle and exploded on January 20.

END_OF_DOCUMENT_TOKEN_TO_BE_REPLACED

On Oct. 31, a 24-year-old man went on a stabbing rampage and set fire to a train in the Tokyo subway. Multiple people were injured, with one in critical condition. This marks the second stabbing on a Tokyo train in two months.

END_OF_DOCUMENT_TOKEN_TO_BE_REPLACED 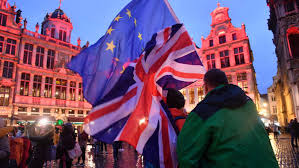 BANGKOK–Protests in Thailand have been escalating since they began on October 6. More violence has been breaking out between opposing groups, which has led to very grim consequences. Many believe that if violence and rioting ensue, the future of Thailand could be very dark.

END_OF_DOCUMENT_TOKEN_TO_BE_REPLACED

On May 25, 2020, George Floyd was murdered by a Derek Chauvin, a Minneapolis police officer who kneeled on Floyd’s neck for eight minutes and forty-six seconds. Although Floyd and multiple bystanders repeatedly told Chauvin that Floyd was unable to breathe, Chauvin did not get off of Floyd’s neck, which led to Floyd suffocating and dying while in the custody of the Minneapolis Police Department. Protests have erupted across the country due to racial injustice demonstrated by this incident and many others. Many of these peaceful protests have turned very violent, prompting the police and National Guard to get involved.

END_OF_DOCUMENT_TOKEN_TO_BE_REPLACED

Forty-three percent of the world’s population can speak two languages fluently. Bilingualism presents obvious benefits, such as being able to communicate with many more people. However, does being bilingual actually make one smarter? Bilingual people have a stronger executive function which results in a heightened ability to switch between tasks, a more efficient monitoring system, and a heightened cognitive ability. Adults aren’t the only ones who experience these benefits; infants, children, and the elderly can benefit as well.