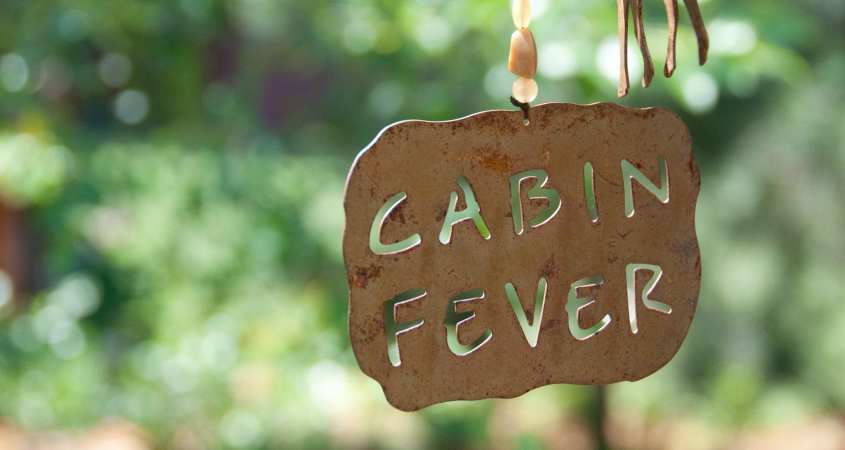 As millions of Americans stay at home because of the Covid-19 pandemic, you might have noticed that you’ve developed feelings of isolation, whether the longing for interaction, feeling bored or unmotivated, or even feeling yourself losing touch with reality. What you might not realize is that these feelings have a name. What you’re experiencing is an age-old phenomenon known as cabin fever.

According to the Oxford Dictionary, the definition of cabin fever Is “lassitude, irritability, etc., resulting from long confinement or isolation in one’s home, etc. During the winter.” The most recognized origin of the term is from the late 1800s through the early 1900s. It was most experienced in harsh winters in the west, where one could not leave one’s home for fear of frostbite or fever. During these times of isolation, people could expect to experience decreased motivation, distrust of those around them, increased anger, and fits of depression.

Cabin fever has also made its touch on the arts. One of the most famous cases of this phenomenon is in a popular 1980 horror film, The Shining. In the movie, the protagonist, Jack Torrance, takes up a job as a caretaker for the isolated fictional Overlook Hotel. He, along with his wife and son, stay at the hotel for the winter while it’s closed. Over time, the isolation gets to Jack, and he begins to act more and more strange. He continues to show more signs of cabin fever. He acts angrily to his family and threatens them continually. Eventually, he reaches peak insanity and kills a man who comes to the hotel to check on the Torrances. Now, most known cases of cabin fever aren’t nearly as extreme as in the case of The Shining, but the movie illustrates just how much social isolation could affect a person.

So, how exactly does one avoid falling into such a state? Well, as I’m sure you know by now, cabin fever is primarily caused by isolation, both physically and socially. Therefore, the best way to get out of cabin fever is to break your isolation, something most people staying at home right now cannot do. However, some simple activities could help.

First of all, try and make an effort to go outside more. Especially during the upcoming colder months, it can be challenging to find the motivation to get outside, but there are plenty of little ways to soak in some extra vitamin d. Try to sit by a window, step outside onto your porch, take a short walk, or even build a snowman. These simple activities can help you get a change of scenery and allow you to break free of the home where you’re confined.

Another way to relieve yourself of cabin fever is through socializing. Cabin fever isn’t only caused by being in the same physical environment. It can also be caused by being in the same social environment. Again, safety guidelines mean that you can’t exactly meet up with anyone you’d like, at least not without wearing a mask and staying 6 feet apart. Luckily, technology has produced many ways to work around this. Do you have a family member that you haven’t talked to in forever? Call them! Do you have a friend that you always forget to get in touch with? Give them a text! Socializing with different people can help you feel less isolated and make staying at home more bearable.

Now that you know exactly what cabin fever is, please do try your best to avoid it. It may seem complicated, but unlike Jack Torrance, you will most likely get through it. However, if you start to find these symptoms getting too hard to handle, please reach out to a licensed mental health professional.