On February 23 of 2020, Ahmaud Arbery, a 25-year-old black man–was chased down by two white men–Gregory and Travis Michael–while on a jog in Brunswick, Georgia these men then shot and killed him. Between February and April, two prosecutors recused themselves, the second one doing so after finding no reason to charge the men with anything. On May 5, a video of Arbery’s death surfaced on the internet, and the Georgia Bureau of Investigation decided to take over the case. It was not until May 7, nearly three months after Arbery’s death, did the local police make an arrest. The case is still under review today.

Following the video’s release, people across the country became aware of Ahamud Arbery’s story and the way Georgia Law Enforcement was responding to his murder. Shaun King, civil rights activist and founder of the Real Justice PAC, helped to spearhead a petition that would force the arrest of Arbery’s killers. He took to various social media platforms to bring awareness to the issue, utilizing hashtags such as #justiceforMaud. Following this, many celebrities began to use their voice to inform others and spread the petition around for people to sign. Ahmaud’s story deserved to be heard, and people across the country were making sure that it would. 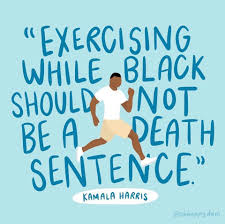 Ahmaud Arbery went for a jog on February 23 for a simple exercise, unaware that he would be targeted for his race. He didn’t think twice about any potential danger that could come to him because he shouldn’t have needed to. Arbery’s death serves to show that systematic racism and race-based hate crimes still exist and are not being appropriately addressed. It took nearly three months for law enforcement to take any action regarding this case. Had it been a white person that was shot, the police would have responded immediately. In fact, had it not been for the massive public protest and outrage over the way Georgia was handling the case, the police probably wouldn’t have even made the arrest. Ahmaud’s story sheds light on the deep-rooted flaw and issues present within the justice system regarding black people and their rights. Despite the strides we as a society have made towards equality with the ending of segregation and many constitutional amendments eliminating racial barriers, we still have a long way to go. Systematic racism exists at all levels of society, even though many have tried to deny or dismiss its presence.

As a white female, it is crucial that I use my white privilege as a way to help spread awareness to this issue within society. The Black Lives Matter movement is one that is meant to shine a light on racism, racial profiling, police brutality, and the black experience within America. Its goal is in its name: to ensure that black lives matter. Many have tried to dismiss the movement by saying all lives matter; however, statements such as these are faulty as history has shown that all lives do not matter. In order for all lives to matter, black lives have to matter first. Ahmaud Arbery’s death is just one of many examples in which black lives haven’t mattered to authorities.

While on this subject, it also becomes essential to understand white privilege. This term often makes many white people uncomfortable and defensive. To begin to understand white privilege, one must understand what it is not. It is not the suggestion that white people have never struggled, but rather that their skin tone isn’t contributing to those struggles. It is not the assumption that everything a white person has accomplished is unearned. White privilege exists as a direct result of both historic and enduring racism, biases, and systems of oppression in which white people often benefit from this oppression. Throughout the years, white people have possessed representation in media and film and have had products designed with the white skin tone in mind. Yet, this is not true for people of color, as most of the time, they are ignored.

This is what many refer to as the power of normal in which white people often have expectations for the needs to be met, while people of color are aware their needs are on the margins. However, these issues go beyond the television screen or local store. Many people of color do not find representation within the workplace and have to be more aware of their surroundings as many find themselves victims of racial profiling or even the subject of harassment in public space. White people, on the other hand, have the luxury of working with people who look like them and never think twice about shopping in public or going on a jog in the afternoon. These examples show how skin tone completely alters one’s way of life. White privilege exists, but there are ways that we can use it: we can teach other white people the barriers to success for people of color, promise to listen and amplify the voices of people of color, be actively anti-racist, and confront racial injustices even when uncomfortable.

Ahmaud Arbery will be remembered. His story is one that demands attention after being left in the shadows for too long. He deserves justice, and his family deserves justice. While this seems like such a simple task, the color of Ahmaud’s skin has drawn out his journey to receive it, which is unacceptable—exercising while black should not be a death sentence. His name will not be forgotten. On what would have been his 26 birthday, people across the country ran 2.23 miles–a nod to the date of his death–commemorating Arbery with the hashtag #IRunWithMaud. Actions like these show that the memory of Ahmaud and his story will not end with his death, but will stay within the minds of people everywhere to make sure that he is brought to justice. Ahmaud Arbery rests in power; however, his family will not find peace until those who murdered him are found guilty and punished for his murder.