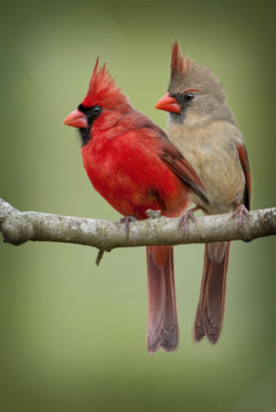 As the Earth tilts towards the sun, and the weather begins to warm, the real magic happens. Flowers bloom and the sounds of Spring burst forth in sweet melody. These spectacular sounds are the mating calls of many winged creatures.

One of the most recognizable is the Northern Cardinal (Cardinalis cardinalis). The mating ritual of the Cardinal is to sing beautiful songs to attract a mate, with more than two dozen variations. Both male and female cardinals sing. The most common sound is a swell of “cheer-cheer-cheer-cheer” and sharp, high pitched chirps.

Although many birds migrate, this is not true of the Cardinal. They have adequate year-round food supplies and are welcome in residential backyards where they often eat from feeders and gardens. With the arrival of Spring comes newly budding plants, insects, and abundant resources for nest building.

The Cardinal, and many other species of birds, acquire their unique coloring from their diet. The rich carotenoid pigments of red berries and seeds are ingested. They flow through the bloodstream into the Cardinal’s developing feather follicles resulting in a memorable, vibrant red color. A favorite carotenoid-rich berry comes from the dogwood tree.

Like many bird species, cardinals are dimorphic. The differences between male and female birds are clearly visible. The females are usually duller in color and have less distinctive markings. For this reason, the female is more easily able to blend into the surroundings while in the nest to protect their young. The males are brighter, bolder colored. The more vibrant red-colored a male cardinal is, the easier it is for him to attract a mate.

The female Cardinal looks for a mate based on how the male bird presents himself. Females examine the size of a male’s bill and his black face. One thing in particular that females look for is the color of a male’s plumage. If he is a deep shade of red, she knows he is a good forager and can provide for her and their babies.

Cardinals are one of the many species of birds that mate for life. They form strong bonds with each other through a feeding courtship ritual. The female bird acts as a nestling mother, and the male feeds her berries in a kissing gesture. The male feeds his mate, and protects the nest, fiercely fighting against any predatory animals.

A mated pair of cardinals build their nest in low lying trees or shrubs. The nest is composed mostly of twigs, grass, leaves, pine needles, and tree bark. Although the male bird helps supply material, the female does most of the construction. Females lay three to five eggs each year. After about a two week incubation period, the hatchlings are fast to mature. The baby cardinals leave the nest after only ten days.

Seeing a red cardinal is said to be a sign from Heaven. Some believe they are spiritual messengers sent by a loved one passed on to protect us. So, listen carefully when you hear them singing and take comfort that you are being watched over.