(GW CHRONICLE) — On January 18th and 25th, 2020, thousands of women’s rights activists united across the nation to advocate for equality. Standing in unity, women’s rights activists carried the gustiness that had initially sparked the origin of the Women’s Rights Movement in the year 1913. The marchers of today represent not only their current generation but also the hundreds of generations that bravely marched before them. For centuries, the notion that men are the superior and entitled gender in comparison to women has been challenged to a point where now women are rising above, rising above stigmas, discriminatory barriers, and unjust enactments that accede to discrimination.

While women have ascended within politics, the workforce, and society, demarcation is still present. From a young age, children are taught the same material in school. However, when the time comes to apply that knowledge in the workforce, men are characterized as the superior gender short shrift. This is evident by the wage gap, lack of dominant roles occupied by females, and inadequacies of basic fundamental rights.

Across the nation, women, men, teenagers, children, and seniors united to empower all to use their voice and raise awareness on pressing issues, including but not limited to, racial equality, LGBTQ rights, the ratification of the ERA, Planned Parenthood, equal pay for women and minorities in the workforce, and the right to constitute what is best for one’s own body. The current administration threatens several of these pressing matters.

During the 2020 National Women’s March, women’s rights activists united to educate the nation on pressing issues that hinder the ability for women to excel and reach their highest potential in every aspect of their lives. In addition, activists advocated for all people regardless of gender, socioeconomic status, ethnicity, sexual orientation, or race to achieve equality.

The Women’s March in Charlotte, North Carolina, consisted of a diverse range of attendees. Thousands of activists and state representatives gathered to advocate for equality. Among the thousands of attendees was the Democratic member of the North Carolina Senate, Senator Jeff Jackson: Democratic Congresswoman, Deb Butler: and County Commission Candidate Leigh Altman.

Significance of the Ratification of the Equal Rights Amendment

One of the most prominent constitutional amendments broth forth by Alice Paul in 1923 was the Equal Rights Amendment (ERA). The ERA legally outlines fundamental rights for women – rights that are constitutionally afforded to men. By legislators ratifying the ERA, discriminatory barriers would diminish between women and men concerning finances, occupations, property rights, marital status, and numerous other matters. The ratification of the ERA would legally abate the notion that women are of less worth and ability than men.

At the 2020 National Women’s March, I had the privilege of interviewing Senator Jeff Jackson. During my interview with Senator Jackson, he discussed his opinion on the ratification of the ERA. When asked why he believes it is vital for the ERA to become part of the Constitution, Senator Jackson stated,

“Well, it’s just about time. This has been long, long overdue. It should have happened decades ago. We need to make an explicit statement of our governing documents as a nation that men and women have equal rights because we haven’t been treated equally. So we need to make that an explicit statement.” He continued, “I think it’s obvious; I think it’s obvious.”

Senator Jackson discussed the importance of the implementation of government documentation that ensured and explicitly stated equal rights for women and men. Hearing the words, “should have happened decades ago,” made me wonder: why have legislators enabled this consistent deficiency of ratifying the ERA which would finally afford women equal fundamental rights?

To many, the ERA is a nonnegotiable amendment and firmly believe the ERA should be ratified; however, the ERA has been withheld from ratification for the past ninety-six years.

I had the privilege to interview Congresswoman Deb Butler. On January 15, 2020, Virginia became the 38th state to approve the Equal Rights Amendment. While this decision does not constitute the implementation of the ERA to the United States Constitution, it significantly raised awareness of what the ERA represented nearly 100 years ago. When interviewed and asked her opinion on the importance of the ratification of the ERA, Rep. Butler stated,

“Well, because women still aren’t paid on par with men and because we need to state definitively that all people are equal in job employment, their ability to borrow money, housing concerns…Again, now that Virginia has passed it, it may very well become a reality.” She continued by saying, “I wanted North Carolina to be the 38th, but Virginia beat us to it — which I’m happy about.”

“Because we know that women do not get equal pay for equal work, and that is a miscarriage of justice that should rattle this nation, and we need to put laws in place to stop it…Women need to be full…have absolutely equal protections under the law as men, that’s why.”

Furthermore, the gender pay gap differs by ethnic groups. Specifically, American Indian, African American, Hispanic, and Alaska Native women are discriminated against the most in regards to the uncontrolled pay gap. Women who identify as these ethnicities earn approximately $0.74 for every one dollar that a White man earns. This discriminatory pay barrier amounts to women of those specific ethnicities earning 26 percent less than White men.

Studying these statistics brings me back to my initial wonder: the United States of America is deemed as one of the best nations in the world; however, how can this be veracious when the majority of women in the US are repudiated fundamental equality?

As a student in high school, I know that I am taught the same material as my male classmates. I also know that once I enter the workforce, this equal playing field in school will become irrelevant as the Constitution does not explicitly state the prohibition of gender discrimination. Due to this lack of specification, sexism has been enabled by its unjust life support, the US Constitution. Moreover, sexism is enabled through partisan interpretations of the Constitution.

While women fought for their rights in Washington D.C., the U.S. Senate debated President Trump’s articles of impeachment for “high crimes and misdemeanors.” The first article charges President Trump with abuse of power concerning him constraining Ukraine to provide him aid in investigating his Democratic political opponents. The second article charges President Trump with obstruction of Congress by restricting the use of evidential documentation and witnesses in return of the House subpoenas of the impeachment trial. Many argue that a trial without witnesses is unconstitutional and in breach of what the branches of government signify.

During my interview with Senator Jeff Jackson, he discussed his opinion on the exclusion of witnesses and evidence presented at the Senate Impeachment Trial. When interviewed Senator Jackson stated,

“I was a prosecutor before I became a state senator. I’ve done a lot of trials. There were witnesses in every single one.” He continued,

“If I went to a jury and said, ‘Ladies and gentlemen of the jury, I have a case to make — you’ll be hearing from no witnesses,’ that would be the end. The judge would say, ‘what were you thinking, Mr. Prosecutor?’ It’s a farce. It’s sad, and it’s a farce.”

Reflecting on the impacts this trial is leaving on the world, Senator Jeff Jackson stated, “I think history will look back on that as a queer farce.”

History is a subject that defines the past to influence the future. If we truly believe that history shapes the future, then the representatives denying President Trump’s obstruction of Congress and high crimes and misdemeanors should have taken into consideration the fact that the decisions of the present shape the standards of the future.

This brings me back to my initial inquiry. We live in a nation that is commonly commendable and highly cherishes its great history; yet, if we genuinely cherish history, then those who withhold governmental power to make changes ought to contemplate the nation’s fundamental principles. The results of the Senate impeachment trial and the repudiating of the ratification of the ERA for the past ninety-six years prove the unfulfillment of basic principles under the current administration.

During my interview with Congresswoman Deb Butler, she expressed her opinions regarding the exclusion of witnesses and evidence at the Senate Impeachment Trial. When asked her position on this matter Rep. Butler stated,

“It’s preposterous; no one has ever had a trial without witnesses and evidence. It’s observed, and an honest person, an innocent person, doesn’t behave that way… I’m against it.”

During my interview with County Commission Candidate Leigh Altman, I asked her of her position on the exclusion of witnesses and evidence in the Senate impeachment trial. She stated,

“We need a full airing of all the evidence. The American public and the Senate are entitled to know all the facts because this is something of the absolute highest consequence for national security and our democracy. So I think that we have to do everything possible to ensure that all relevant evidence is heard.”

At the women’s march, I spoke with Alicia Formoso, a ninety-four-year-old women’s rights activist. Alicia’s story of women’s rights activism originated when she arrived in the United States in the 1960s after fleeing Cuba once it became a communist country. Her voice advocating for equality joined the harmonious unity of thousands of activists marching in the streets of New York City. While she may not have marched on her feet during the 2020 National Women’s March in Charlotte, she dutifully held up her sign in her walker chair. She chanted, “Las mujeres son poderosas y merecen igualdad!” (“Women are powerful and deserve equality!”)

As Americans claim in the Pledge of Allegiance, “I pledge allegiance to the flag of the United States of America…with liberty and justice for all.” Allow those words, especially the word “all,” to resonate within.

As once stated by the widely renounced Elizabeth Cady Stanton, “We hold these truths to be self-evident: that all men and women are created equal.” 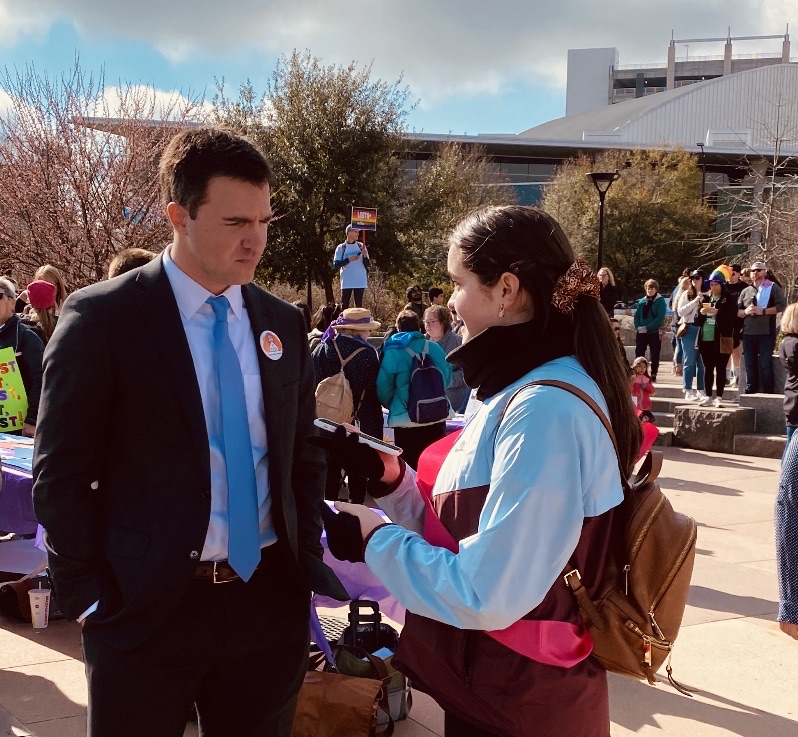 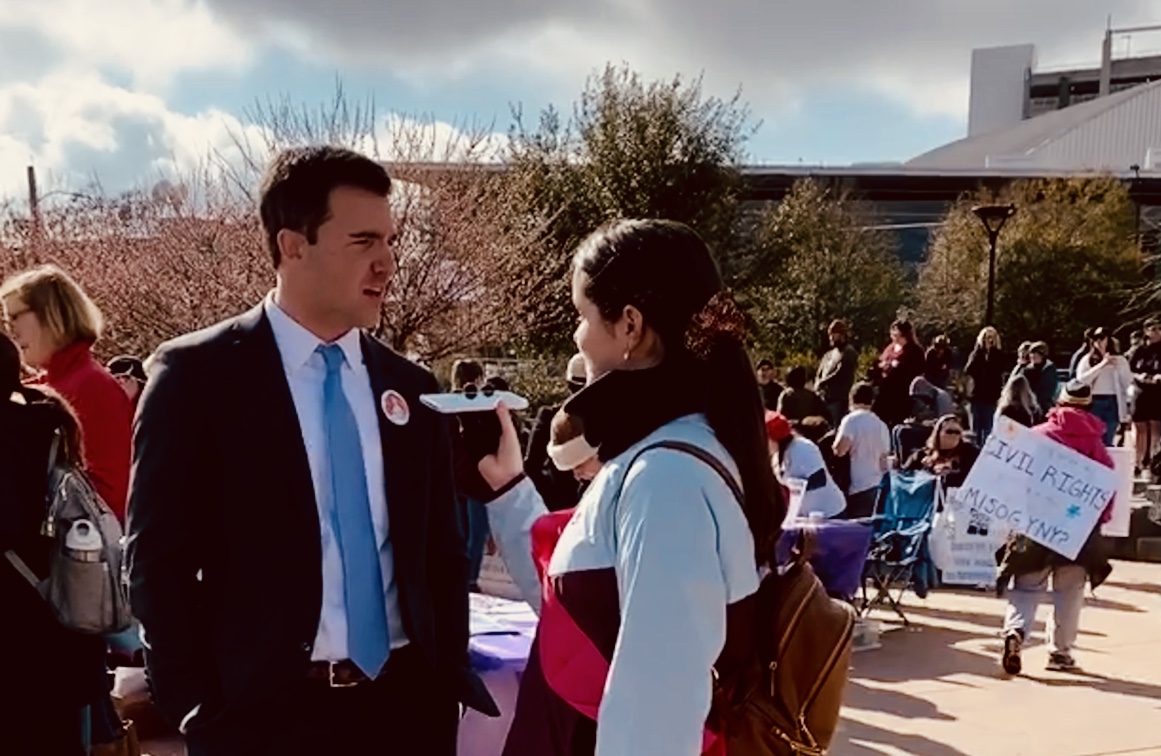 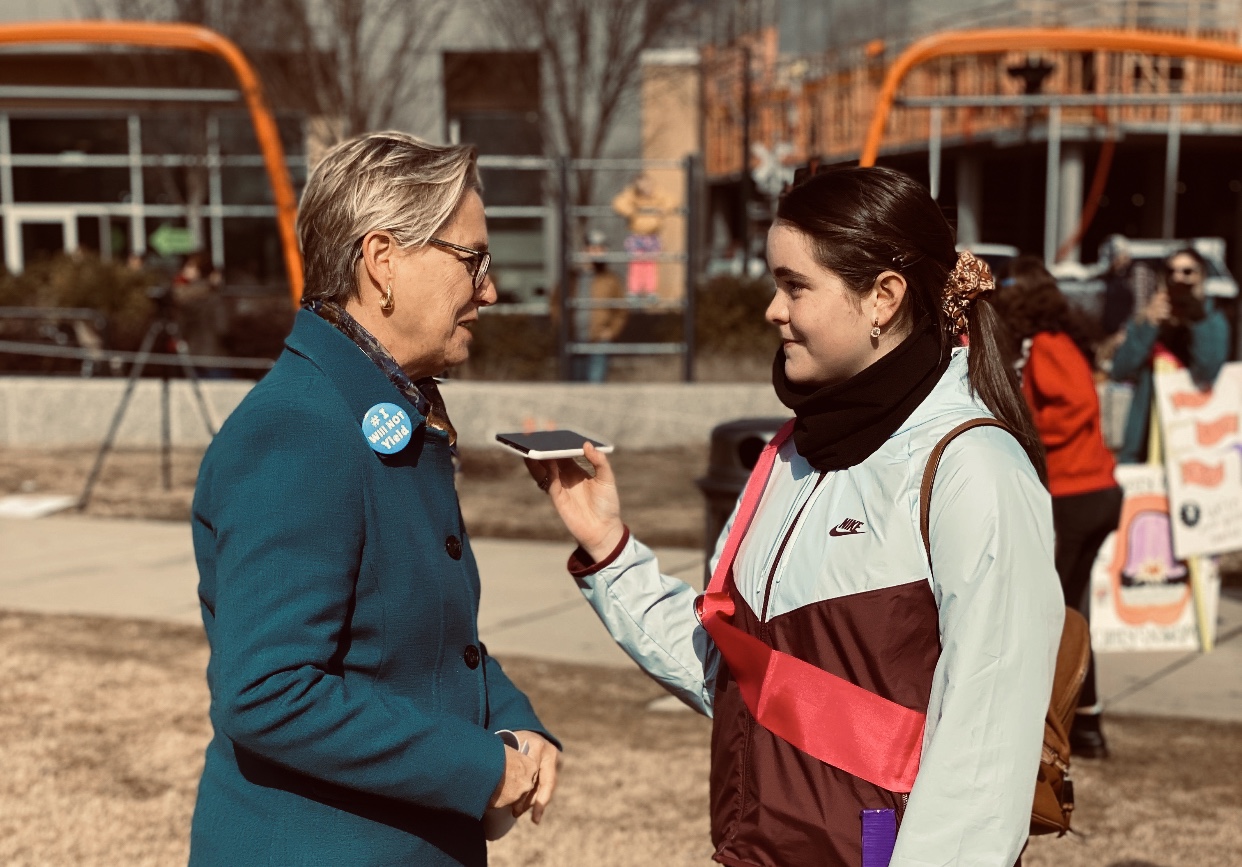 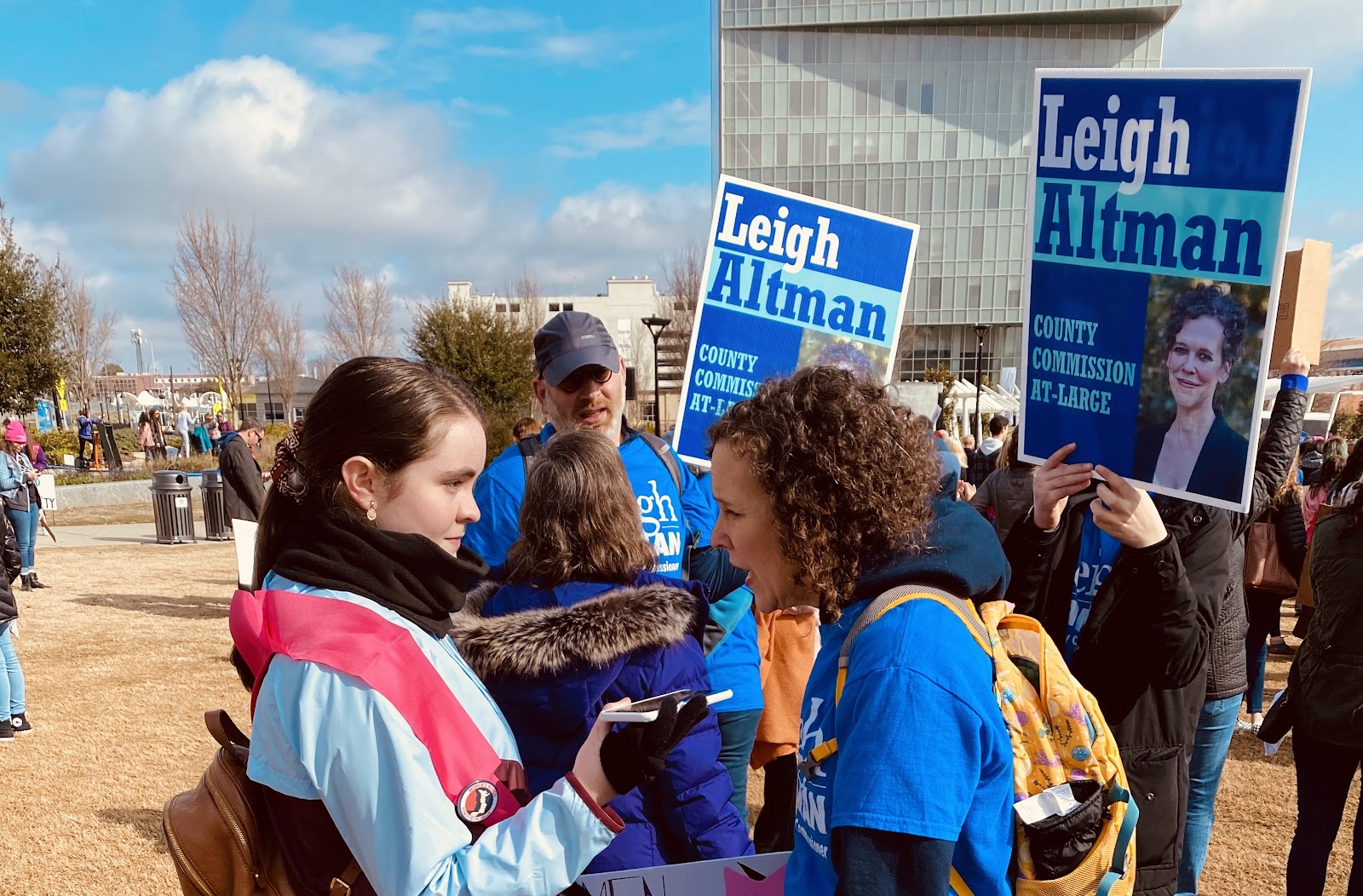